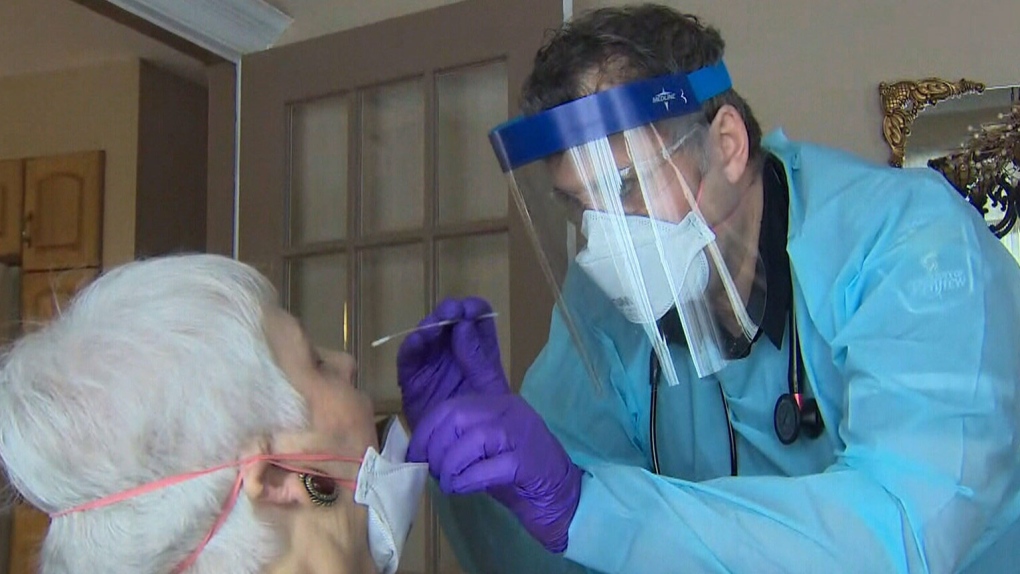 OTTAWA -- The number of active cases of COVID-19 in Ottawa has been steadily declining this month to below levels last seen in March.

Out of the 1,908 total laboratory-confirmed cases the city has seen since the first case was confirmed March 11, 1,512 cases have since been resolved non-fatally. 235 people in Ottawa have died of COVID-19.

The number of lab-confirmed cases in which patients are still experiencing symptoms is 161, a number not seen since before April 1, when there were 175 active cases out of 194 total cases.

There are currently 37 people in the hospital in Ottawa, according to the lasest figures from Ottawa Public Health.

Active cases rose in April but fell in May

The number of active cases in Ottawa rose steadily in April, reaching its peak on April 29*, when there were 673 active cases of the disease out of 1,297 total cases. By that date, 76 people had died and 548 people had recovered, according to data taken from Ottawa Public Health's daily epidemilogy updates. 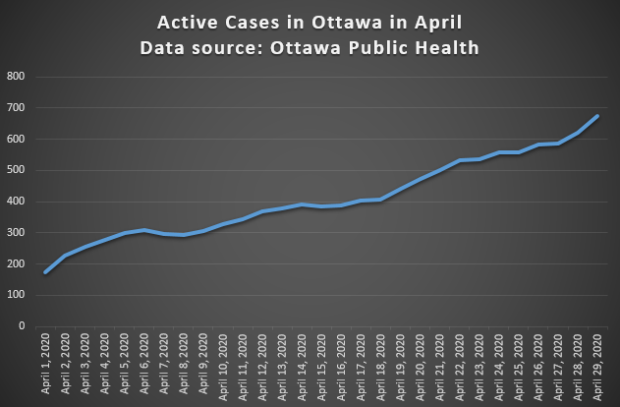 In May, the number of active cases began steadily dropping. Some of this can be attributed to the number of people who lost their lives to the disease. As of Tuesday's update, there were 235 total deaths in Ottawa since the pandemic began, 159 of which were reported in May. 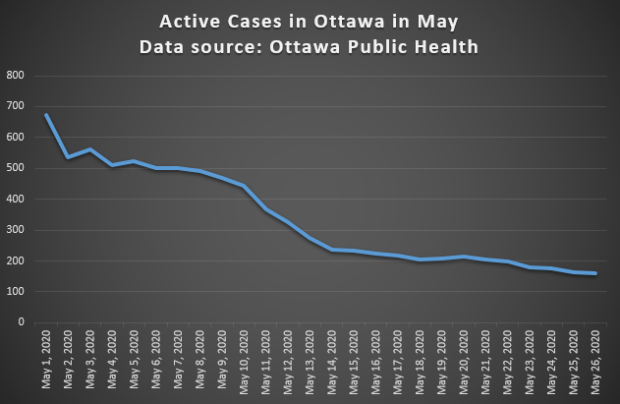 Part of this is attributable to a change in reporting methods. Ottawa Public Health says the province considers cases that are 14 days past symptom onset or 14 days past the episode date as resolved, provided the individual is not in hospital. Cases that are listed as "recovered" in the COVID-19 Ottawa Database (COD) are also considered resolved.

"This represents a change from reports prior to May 1, 2020 that relied solely on the classification in the COD/iPHIS and increases the number classified as Resolved," a footnote in Ottawa's daily epidemiology report reads. Prior to May 1, the number of resolved cases was made up of "persons whose symptoms have resolved and who have been discharged from isolation as per the Ministry of Health Public Health Guidance on Testing and Clearing Cases."

Nevertheless, 611 new lab-confirmed cases of COVID-19 were reported in Ottawa between May 1 and May 26, compared to 966 cases between April 1 and April 26.

Ottawa's medical officer of health Dr. Vera Etches has said in the past that modeling suggests the number of actual infections is likely much higher than the number of laboratory-confirmed infections. Ottawa Public Health estimates the actual number may be between 5 and 30 times higher than what is reported.

The virus has not left our community: OPH

In a statement to CTV News, Ottawa Public Health said while there are some positive trends, the virus is still out there.

"Although we are seeing some positive signs, the virus has not left our community," OPH said. "The daily case numbers continue to show that there is community spread - cases that we cannot attribute to direct contact of a confirmed case or travel."

As of the May 26 report, there were 182 cases listed as "community-acquired" in OPH's reporting on exposure, compared to 172 for travel. In its latest report, OPH listed 1,440 cases as "close contact with a case and outbreak associated." Previously, the number of cases linked to close contact with another case and the number of cases linked to institutional outbreaks (i.e. long-term care homes, retirement homes, hospitals, group homes and shelters) were separate items, with institutional cases representing more than 50 per cent of all known sources of exposure, as opposed to approximately 20 per cent for close contact.

"The number of hospitalizations is a better measure of the level of transmission within the community," OPH said.

As of Tuesday's report, 37 people were hospitalized with COVID-19. OPH's numbers show a steady decline in hospitalizations following a peak in early May, and a low level of new daily admissions. 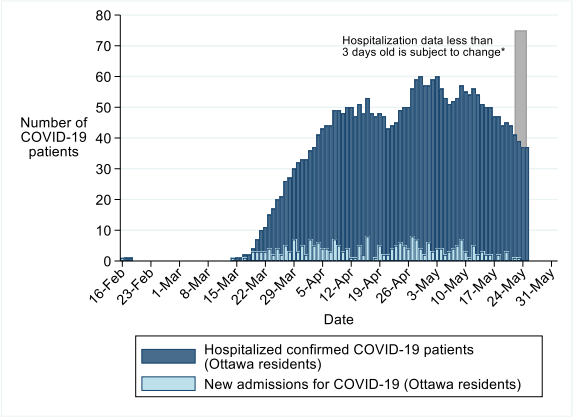 It remains unclear whether the numbers of new confirmed cases has dropped over the course of May because fewer people are contracting the virus or because fewer people are getting tested. Ottawa Public Health does not provide daily testing numbers, and the criteria for who can get a test expanded only recently to anyone with symptoms and, later, to anyone who believed they had come into contact with the virus, symptomatic or not. The number of daily tests performed in Ontario has been below the provincial target of 20,000 per day.

UPDATE: Shortly after this article was published, Ottawa Public Health announced it would be piloting a "COVID-19 dashboard" project that includes daily testing data. While exact figures are not listed, the graph shows the level of community testing peaked in mid-May at around 750 tests per day and has since fallen to well below 500 tests per day. 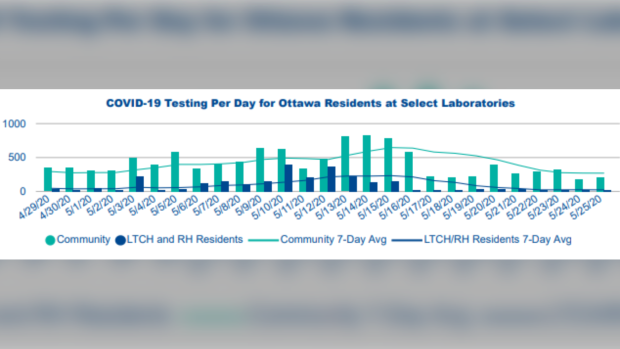 CTVNews.ca has been tracking every case of COVID-19 in Canada. Their graph depicting the number of active cases in Ontario shows a steady increase in new cases in the province starting around May 18, after a relatively steady decline starting in late April. The graph dips at the end due to a steep decline in new case numbers reported Tuesday.

While Ottawa's number of active cases is trending downward this month, Toronto's active case count has jumped dramatically between May 1 and May 24, according to the latest data available from the City of Toronto's website.

Ontario's CMOH on where the bulk of the new cases are popping up:

Ontario Premier Doug Ford has been opposed to the idea of a regional approach to relaxating COVID-19 restrictions, despite calls from some municipalities. The idea, however, is being considered by provincial health officials.

On Wednesday, the Ontario Government extended its emergency orders until June 9.

Likelihood of a second wave determined by our actions: OPH

With testing in Ottawa expanded to asymptomatic people, it's possible the number of confirmed infections could rise, giving a clearer picture of the spread of the virus in the community.

"People can be asymptomatic and still spread the virus. With a lot of focus on long-term care homes, we would like to remind residents that the virus is not only occurring in long-term care homes but also in the community," OPH says. "We are strongly encouraging everyone who has symptoms that could be COVID-19 to self-isolate and to present for assessment, even if the symptoms are mild, so we can track down the sources of infection in the community and break chains of transmission."

Ottawa Public Health is reminding residents that while we slowly start to return to regular routines, we must continue to practice physical distancing and infection control.

"We are still in a pandemic situation," OPH says. "As we go about reopening Ottawa and resuming activities, we must do so in a smart way, which includes keeping our two metre distance from others and wearing a cloth mask in close contact with people outside our households. The likelihood and severity of a second wave is largely determined by our actions; what we do today will impact our future freedoms."

*Ottawa Public Health did not report any COVID-19 data on April 30 because they were changing their reporting methods.

**Ottawa Public Health did not provide data on the number of resolved or active cases on May 1 or May 7. For the purposes of creating a graph, CTV News used the previous day's number of active cases on those dates.