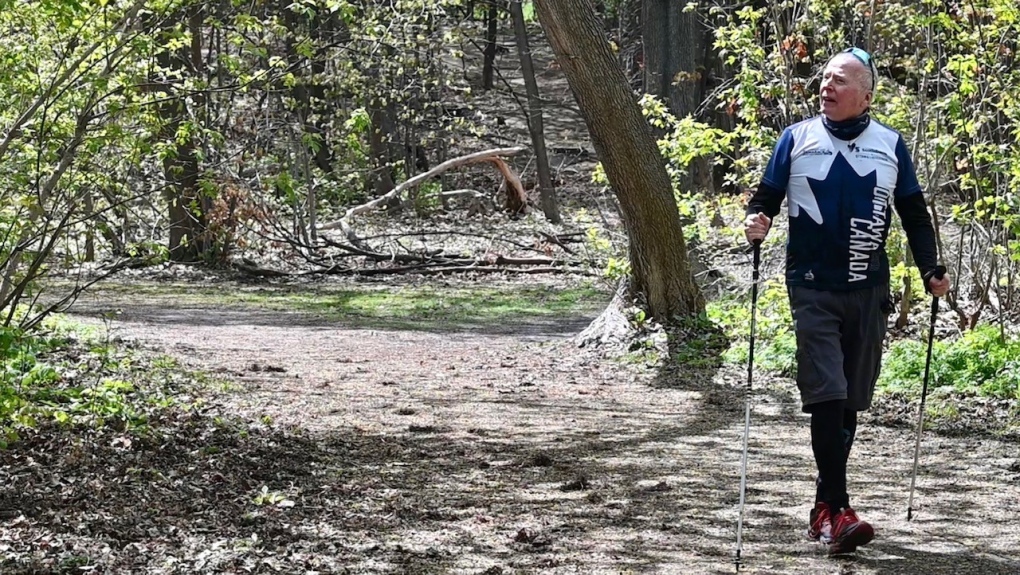 OTTAWA -- Michael Baine strolls along a tree-lined trail in Ottawa’s Hampton Park. Rays of mottled light dance on his face, illuminating a fierce determination in his eyes.

Baine strategically plants walking poles in the gravel path beneath.  They help propel Baine forward and keep him balanced.

He jokes aloud about his "tortoise" like pace; the seasoned distance runner is typically accustomed to travelling farther and faster.

He’s completed more than 30 half and full marathons since the late 1970’s.

More recently, the former teacher and principal got hooked on high-altitude trekking.

"And that’s when I became an outdoor walker to train and travel to exotic places like Nepal and Peru and the Alps and New Zealand," he said.

A year ago, Baine was in great shape and feeling strong, training to summit Mount Kilimanjaro in Tanzania.

"And unfortunately, I came back from a hard training workout and there was a lot of blood," Baine said.

"I was diagnosed with stage four metastatic prostate cancer.  Every year, I had had regular check-ups and my PSA done.  And all that stuff was normal.  So, it was one of those kinds of things that didn’t follow its usual track," he said.

"By the time they found it, it was too late for the prostate and too late to have stopped it from spreading."

The incurable cancer had spread to Baine’s femur. Immediate surgery was required to prevent his leg from breaking.

"They took all the bone marrow out of the femur and replaced it with a titanium rod that went from my hip to my knee," he said.

There would be more surgery, chemotherapy, radiation and hormone therapies. Baine’s excellent physical conditioning allowed for aggressive treatment, and helped doctors drive the cancer into remission.

"I got home, and she had invited my family all of my neighbours on the street. They lined the street and they all had bells and they were all ringing the same bells as the nurses had at the cancer centre. It was just so emotional." 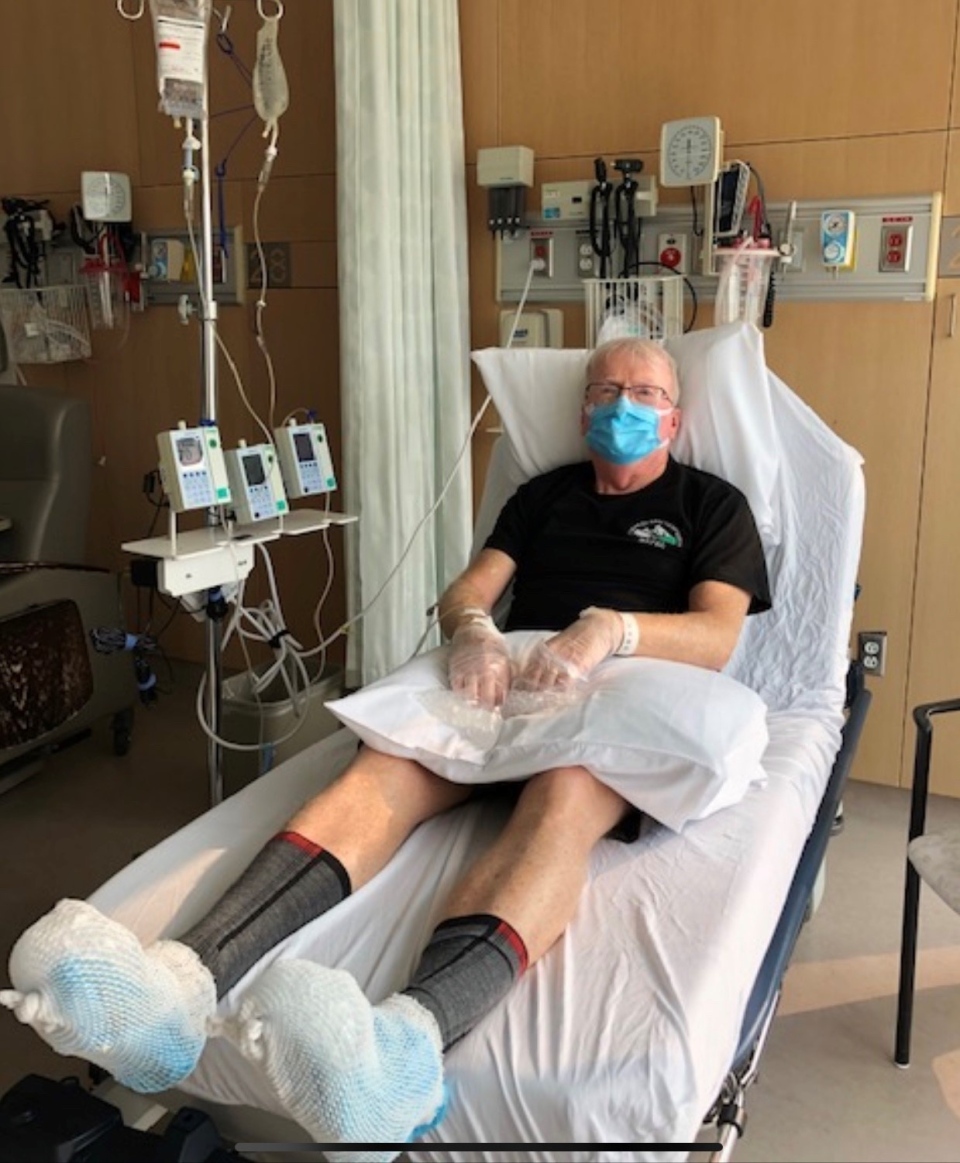 Baine had hoped for a long period of remission—perhaps a year--but it was not to be.

"Unfortunately, in two months it had returned and spread into my pelvis."

Despite the new discovery, and the pain the cancer was causing, Baine said he had commitments to live up to.  He had already registered for Tamarack Ottawa Race Weekend’s virtual half-marathon.  Cancer, he decided, would not stop him from walking in the event.

"I thought, 'OK, I gotta make sure I do this thing no chickening out now,'" Baine said.

"So, I decided to make it a fundraiser."

This Sunday, a year after his first cancer symptoms presented, Mike Baine is walking in that half-marathon.   He’s seeking donations in support of the Ottawa Hospital Cancer Centre.

"There’s a link to my page Mike Baine or Mike’s Adventures.  That’s my team.  I’m the only member of my team, but I consider all the people who are donating to be part of my team," he laughs.

Baine hopes a portion of the funds will be used to help patients he met during treatments at the cancer centre.

"There are a lot of people who were already hurting.  They had chronic illnesses, life has already not treated them the best. Then they got cancer."

"I, on the other hand, got a bad cancer but I had a blessed life up until now," Baine said.

Walking in the race with his wife Deirdre, Baine will be fuelled by warm thoughts of his large, loving family and circle of friends. He recently had radiation therapy to ease the unrelenting pain of his condition.

"Radiation on the bone where the cancer has spread is one of the things they used to take away the pain, so I’m hoping that it’ll do that for me." 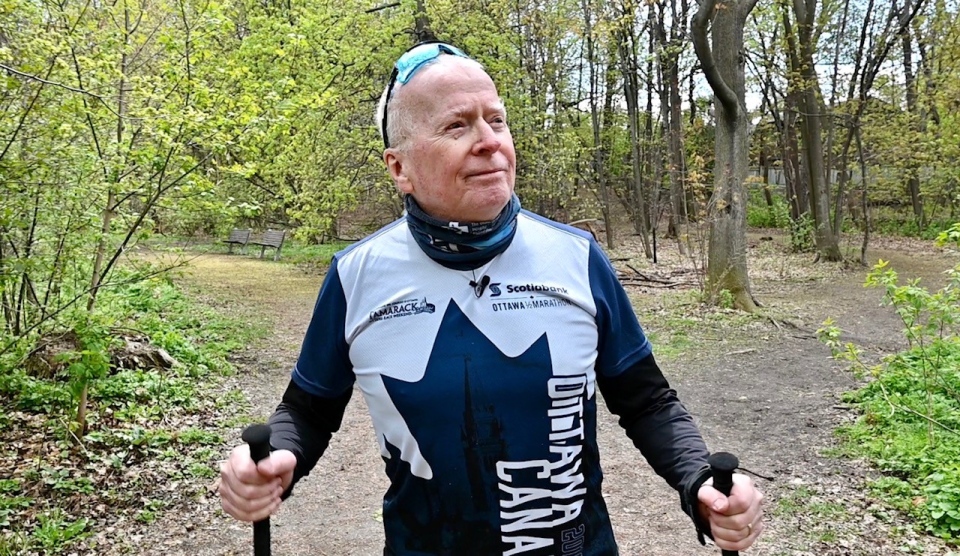 Baine is being considered for a clinical trial at the Ottawa Hospital Cancer Centre, along with some high-potency medications to address his cancer’s spread.

He says he still hopes to summit Mount Kilimanjaro in just over a year from now.

Every step of the journey, Mike Baine will be counting his blessings.  He’s focused, not on the challenges in his life, but its riches.

"I’ve had a happy year.  Despite the pandemic, despite the cancer, most days I’m pretty happy," he said with a smile.

"I’m a lucky guy. I’ve got twelve beautiful grandchildren, four beautiful daughters, four sons-in-law who are like my own sons, and I’ve got Deirdre. That’s all I need," said Baine.

"I’m grateful every day. And how can I not be with the riches I have in my life? They way outweigh the fact that I have stage four cancer. Yep, I’m a very grateful man."