A modern twist on a Brockville, Ont. tradition: 'Old Meg' returns to the waterfront in statue form 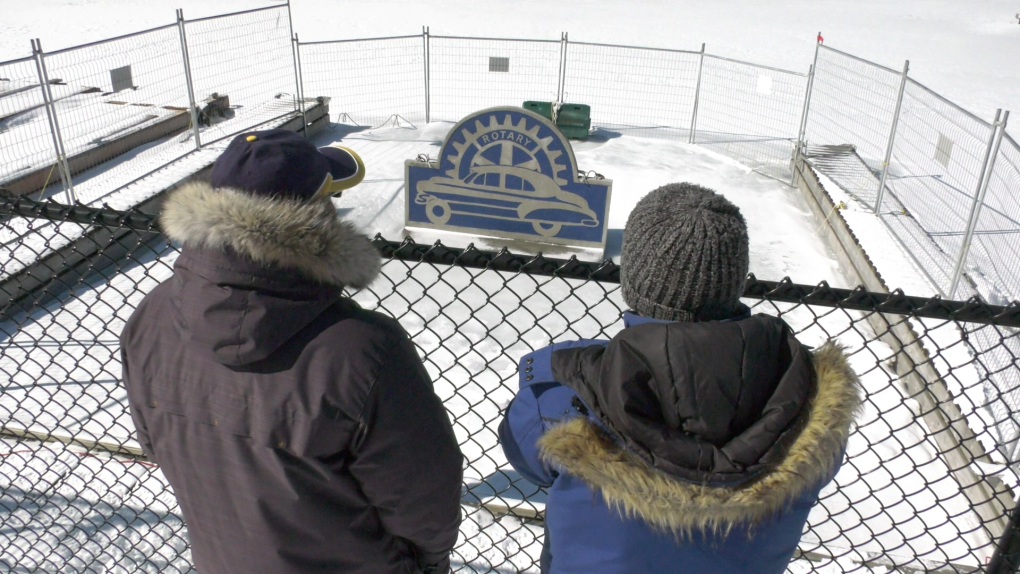 BROCKVILLE, ONT. -- Drivers along Blockhouse Island in downtown Brockville will notice something different sitting on the harbour ice: a new twist on an old event.

On Feb. 26, a new sculpture was laid upon on the inner harbour ice with a familiar name engraved at the bottom: Old Meg II.

"We had a lot of people say, 'Oh, that was a lot of fun back in the sixties', so we tried and make it a little fun here now," said Don DeGroot of the Brockville Rotary Club.

The new statue pays homage to the actual Old Meg car that would sit on the ice in front of the Brockville Rowing Club in the 1960s as part of a fundraiser for the Rotary Club. People bought tickets to guess the date and time it would fall through the ice in the spring.

"The Rotary Club would have a clock on it. When the car went through the ice, it would stop," DeGroot said. 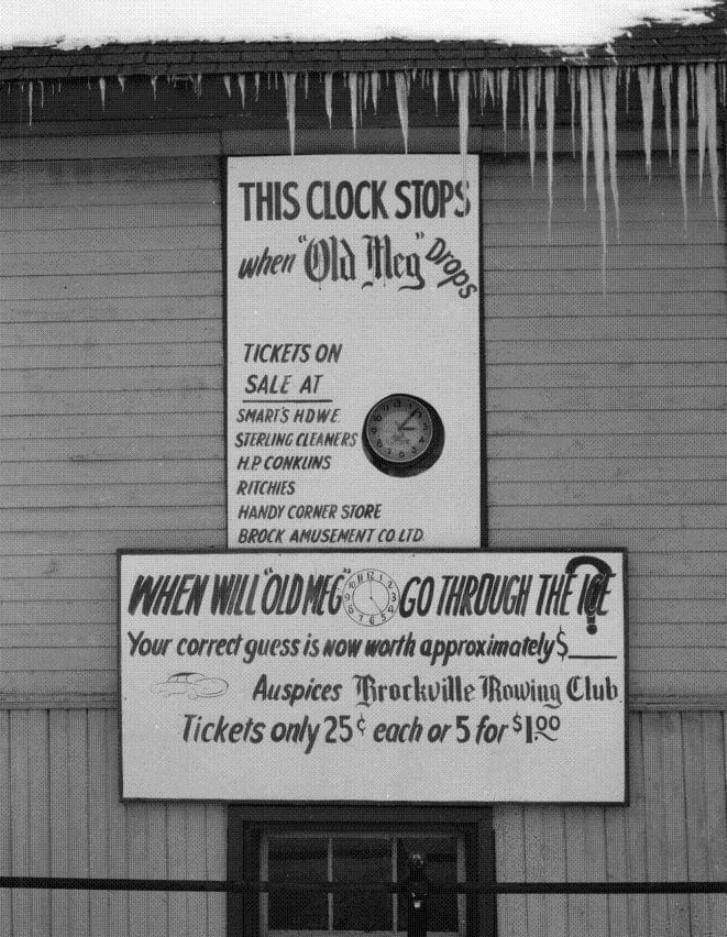 "Back in the sixties, you had instances where the ice would form across the river and they had ice bridges. We know in today's time that's not going to happen," said DeGroot. "We chose (the new location) in the inner harbour where the ice lasts longer and doesn't get unsettled with the wind and so forth."

DeGroot pitched the idea to the Rotary Club last year, and artist Dave Sheridan, who happened to be at the meeting that night as a guest speaker, jumped on board.

"Don was mentioning about the Old Meg story and that was a part of my childhood," said Sheridan. "I recall going down to Water Street or driving around town and asking my dad to drive down and lets check it out and lets see if it's gone in yet and that was always fun every year. 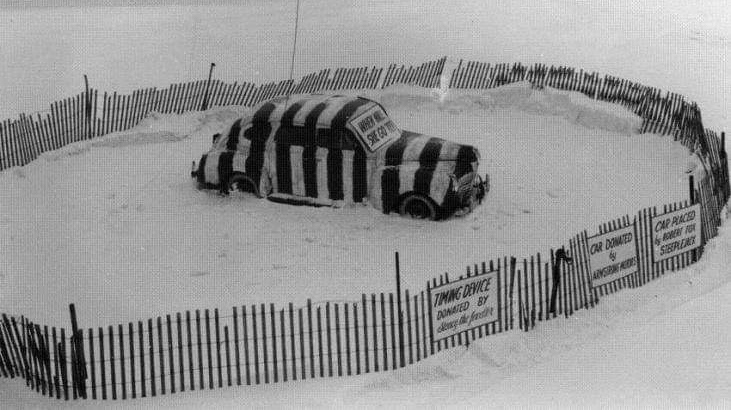 "When I heard that, I wanted to be a part of it, and especially knowing it's a fundraiser for the community it doesn't get much better than that."

Sheridan started on the first sculpture in the summer, shaped like a 1950s Pontiac Silver Streak.

"It was looking really great until about mid-December. I was about to do the casting process with it and we had a catastrophic situation and unfortunately, during one of our zoom meetings, I had to explain to the Rotary Club that, unfortunately, the sculpture has been destroyed," Sheridan said.

With only a month and a half until the deadline, he went back to the drawing board and sketched out the current concrete version.

"I spent many hours working on this version. This is 3000 pounds, about the weight of a small car. I do believe that it would be comparable, anyway," Sheridan added. 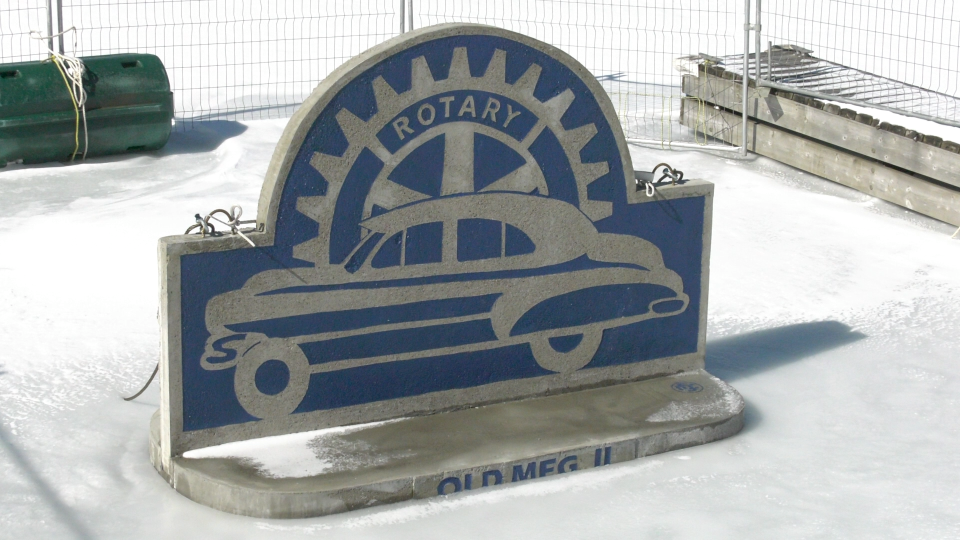 Sheridan said the work couldn't have be done without help from many sponsors along the way including Creative Concrete, Brockville Home Hardware, Falcon Security, Dulux Paints, Zigman Metals, the City of Brockville and many others.

"I'm always elated to see the final stage of a project and to me it's a nice natural kind of felling of excitement," Sheridan said.

The sculpture is sitting on about 12 inches of ice, now waiting patiently for some warm spring weather.

People are asked to go online and pick a time and date once the Rotary Club website is updated. this year it is free to place a wager.

"The winner, at this point, they just get recognition. There is no prize or anything," said DeGroot.

"With COVID-19, it takes a bit of a distraction. It's a good news story for a change. People thought it was a really good idea at the time so it was pretty positive then and I think it's pretty positive now," DeGroot added.

"I'm thinking April 15th. No, April 14th, my wife's birthday. Let's go for that," added Sheridan when asked when he thought it would go through the ice.

The Rotary Club is aiming to return the event to a fundraiser again next year, as it always was. Both men are happy it could all come together in the end.

"As a kid, it would always be a fun thing to see, to dream about when it's going to go under the ice and it made the winter a little bit shorter. I do hope that feeling continues with this and I hope that we get many, many years out of this. I built it like a tank!"

You can pick a date and time you think old meg ii will fall through the ice at https://oldmeg.rotarybrockville.ca/