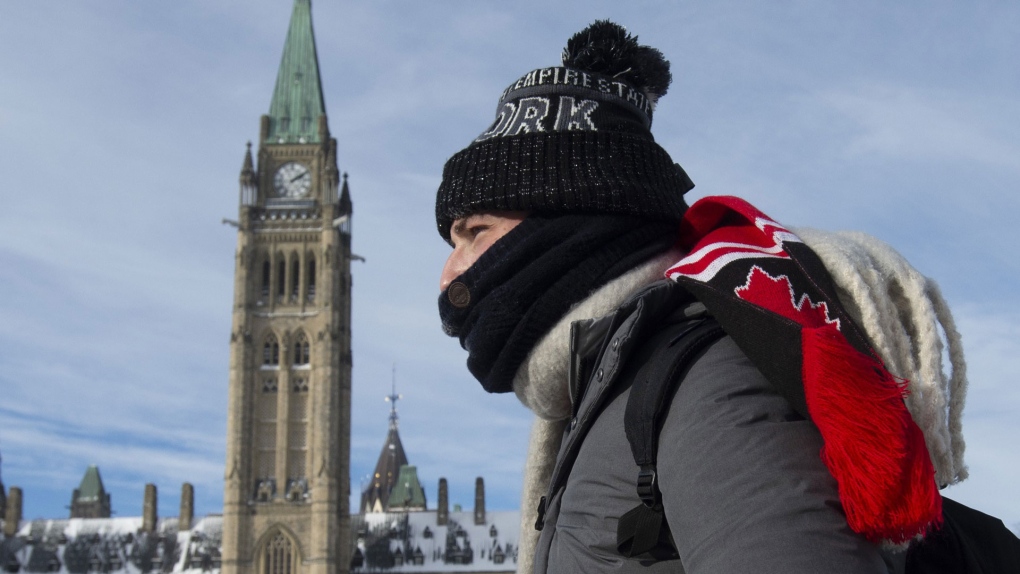 A tourist makes his way onto Parliament Hill Monday January 21, 2019 in Ottawa. Cold weather continued to affect the region with cold temperatures and windchill warnings in effect. THE CANADIAN PRESS/Adrian Wyld

Enjoy this gorgeous week of sunshine and mid-20's for the last week of summer, eastern Ontario and the surrounding areas should have an average fall...but a cold winter ahead, predicts The Weather Network.

The network is predicting Western Canada, including B.C., Alberta, Yukon and the Northwest Territories, along with parts of Atlantic Canada will have slightly warmer-than-normal temperatures for fall because of warmer oceans and wetter conditions along coastal areas.

Scott added that precipitation will also be right around the average in most parts of Canada.

"It's not going to rain all the time, it just means that when it rains, it really, truly will pour," he said.

Near-normal fall temperatures are expected in the Prairies, Ontario and Quebec.

"When you look at the centre of the country, for the most part, we think this fall is going to be pretty much bang on normal for temperatures, maybe shading a bit cooler than normal towards the Hudson's Bay lowlands, in northern Ontario, northern Manitoba and northwestern Quebec," Scott said.

A milder winter is expected in British Columbia and the western parts of the Prairies, he said, but it trends colder to the east all the way to Atlantic Canada.

"The bottom line here is a fair amount of winter weather to go around. This looks like a pretty cold winter for much of the central and eastern parts of the country at this point given what we're seeing in the oceans."

Scott broke down the winter forecast for each region in Canada:
--Ontario and Quebec --  The network is predicting near-normal temperatures for the fall with extended periods of both mild and cold weather. A colder than normal winter is expected for most of the region.
"This is not a winter that we get off the hook easily," said Scott.
The winter will have some similarities to some harsher winters and there could be a delayed start to consistent winter weather as was the case last year.
-- British Columbia --  Scott said the network is forecasting slightly warmer than normal temperatures for fall. While fall will include stretches of dry weather, wet weather will overdeliver with above normal rainfall in coastal areas. Milder than normal temperatures are expected for the winter.
"What is interesting is that the Northern Pacific, off the coast of B.C. and Alaska is very warm, it's very toasty there, as is the Atlantic Ocean south of Atlantic Canada."
-- The Prairies --  Near-normal temperatures are expected for fall and a milder-than-normal winter in westernmost parts of the region and colder temperatures are likely to the east.

Scott said it's hard to say exactly what will happen across the Prairies region because there have been so many wild weather fluctuations.
It's been a tough year for farmers with wet conditions around Edmonton and the north and dry weather through parts of the south-western grain belt, he said.

"The trend into fall is for near normal precipitation so hopefully we can hold that and not having anything that's too wet so that agricultural interests can get the harvest in this fall."

"As you move farther north -- northern New Brunswick, Baie de Chaleur and then through Labrador -- we think it will be closer to normal just as we get away from that warmer water influence and precipitation we do expect to average close to or above normal."

"The main rationale there is because the waters are warmer, so where you get the winds coming off the water ... because it's warmer we expect overall the temperatures to be above normal in these regions," he said.