A well-known Ottawa dairy farmer and agriculture advocate is trying to stay strong after a fire ripped through his barn killing about 80 cows.

The blaze broke out early Friday afternoon on the Black Rapids Farm on Prince of Wales, just north of Fallowfield Road. Owner Peter Ruiter said he watching the burns barn, with his animals inside, was one of the hardest days of his life.

"I ran out and I just saw flames, flames from one side of the barn to the other and that's just something I don't need to relive because I sat there and said I'm sorry cows," he said. "I just couldn't save them."

Ruiter said the day started off on a high note with the birthing of a new heifer calf.

"Everything was good I carried it home over my shoulders and put her and the mom in the barn," he said. " I was thinking I was having a good day."

But as he was eating lunch, someone knocked on the door saying his barn was on fire. Ruiter said he was desperate to help his cows but knew it just wasn't safe to do so. Luckily no humans were injured in the fire that caused at least $1 Million in damage.

Instead, Ruiter said he went to the barn this morning upon waking up to make sure all the hot spots were gone.

Luckily, Ruiter said he still has about 18 cows, including favourites Stacey, and Santini, as well as a few cows waiting to give birth. The animals were in a pasture across the street when the fire started.

Three farm structures were destroyed, including a 125-year-old barn.

The area has no hydrants, so water had to be trucked in to help battle the blaze.

The land is owned by the National Capital Commission so it will play a role in whether the Ruiter family is able to rebuild. Although the future is uncertain, Peter Ruiter is hopeful his family farm of more than half a century will continue its dairy operation in time.

"Things go bad so you can see the good in everybody and I'm seeing a lot of good," Ruiter said about the outpouring of support from the community at large. 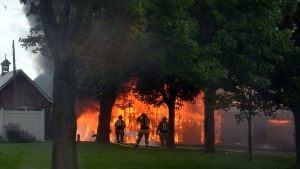