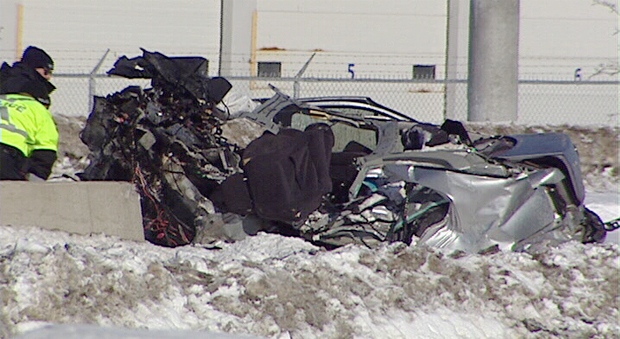 Ontario's Special investigation unit is looking into what led to a fatal collision on regional road 174 at the Trim road exit. The SUI will investigate the pursuit as well as  the length of the pursuit. SUI will also investigate if/when the pursuit was called off. Ottawa Police have told SUI the pursuit had been called off prior to the crash.

The vehicle appears to have struck a cement meridian on the highway. The damage to the front end of silver Volkswagen is extensive.

The SUI says some time after midnight Ottawa police 'attempted to initiate a traffic stop in the Trim road area.' A short time later the victim's vehicle crashed near the junction of the highway and Trim road.

The SIU has assigned four investigators, two forensic investigators and a reconstructionist to examine the circumstances of this incident. The investigators will likely try to figure out how fast the vehicle was travelling. The posted limit is 90km/hr.

The police watchdog is called in anytime a police are involved in a fatality. It's an arm’s length agency that investigates reports involving police where there has been death, serious injury or allegations of sexual assault.