15 people treated by paramedics during Escapade 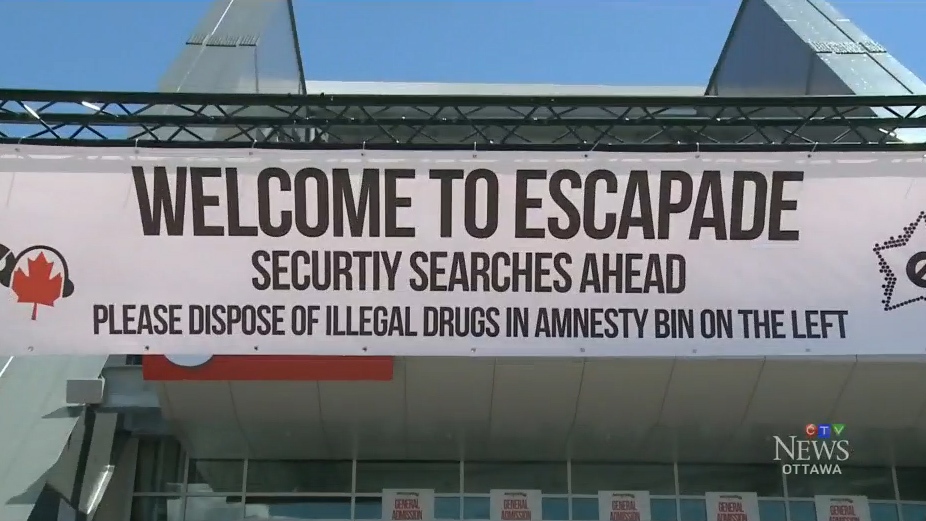 A banner above the entrance to Escapade Music Festival. (CTV Ottawa)

Nine people were taken to local hospitals during the festival, mainly for overdoses.

Day 1 of #Escapade2018 completed. Great teamwork with the organizers, @CdnSkiPatrol, @ottawahealth to keep overdoses at a minimum. 5 OD taken to hospital, 1 critical and 1 serious, both due to GHB. None are life threatening. Other 3 were minor. Back at it tomorrow! pic.twitter.com/tbbYMKrpng

The overdoses come after stark warnings from emergency responders and festival organizers about the dangers of overdoses and the presence of fentanyl, a potentially fatal drug.

"Obviously the safest festival is the best," he said. "The more we can add and improve by working with emergency services to make sure people are here and staying hydrated and having a good time ... the better."

The electronic dance music festival is now in its ninth year and its second at Lansdowne Park. Big names such as Zedd, and Alesso as well as dozens of other artists are expected to draw about 30,000 people to Lansdowne Park this weekend. This year, organizers added a fourth stage to put on even more shows for festivalgoers.

"It's for the music," said Patrick Carriera, a first timer. "It's for the community. Everyone is so nice and lovely here."

Attending #Escapade2018? #Partysafe to have a night to remember and not one you want to forget. pic.twitter.com/sDxwN7DTcm