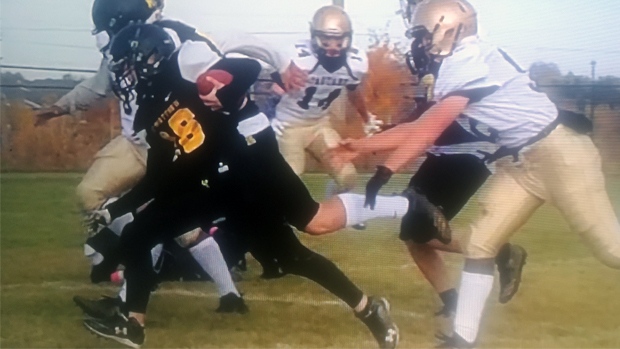 OTTAWA - Call it a history-making end to an incredibly successful season for St. Matt's football.

Fourteen year old Mya Sluban is the first girl at the school to ever score a touchdown in varsity high school football.

Playing for the St. Matt’s Tigers against St. Joseph’s last week in a lop-sided win, Sluban ran the ball into the end zone in the final quarter of the season.

“So many of my teammates and coaches worked together to set that play up, make their blocks and help clear a path for me to the end zone”, said Sluban. “It was the final game of the season in the final quarter and I really wanted to do it so I wouldn't let the team down.”

St. Matt's coach Jean-Sorphia Guillaume says this was a team goal. "In the last three years we've always had girls on the team", he said. "She works hard. She never complains. She never misses a practice. Our whole team made sure: let's get Mya in the endzone."

Sluban is a gifted athlete and competitive skier. She has also played touch football for two years. This was her first year playing varsity football.

Sluban’s father Mark was right there at the goal line recording it all.

“I’m thinking don’t get hurt but make it. Hit that pylon”, he said

“I don’t know if I’ve ever seen her that happy."

Girls on the football field are rare but not unheard of. In 1982, Rolanda Coe scored a touchdown for the junior team at Confederation High School.

"The boys were so happy for me and all my teammates", said Coe. "You're striving for a goal, and I guess trying to beat the boys. We deserved as much recognition as them".  As for Mya's achievement: "I think it's great tell her to keep going."

Sluban's touchdown is believed to be the first for a girl on a varsity, or senior football team.

Mya hopes her touchdown, and the fact she is on the field with the boys every day, will encourage other girls to think about taking up football.

“I hope so. I started playing football in a girl’s Touch League and really enjoyed the game. I hope other girls who enjoy football as much as I do aren't afraid to try tackle football.”